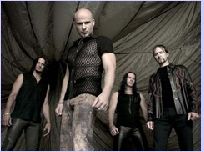 Heavy metal/Hard rock band Disturbed came together through the matching of a band with a singer. Longtime friends Dan Donegan (guitar), Mike Wengren (drums), and Fuzz (bass) played together in Chicago for some time before hooking up with singer David Draiman around 1997. Draiman had grown up in a religious family against which he rebelled, being expelled from five boarding schools in his adolescence. His anger found an outlet in the thrashing sound of Disturbed, and the band built up a following on Chicago's south side before a demo tape led to their signing to Giant Records, which released their debut album, The Sickness, in March 2000. The band gained more fans and exposure playing the main stage of the 2001 Ozzfest, then breaking away to do their own self-described "victory lap" around the U.S. that fall. Also during this period, they managed to record a vicious new version of wrestler Steve Austin's theme song that was so good it managed to receive radio play, and they were one of the many bands announced to work on a high-profile Faith No More tribute album. The band stepped into the studio after stepping off of the road and began work on a new disc that would reflect their growth as a band. Feeling experimental, the group worked with producer Johnny K and mixer Andy Wallace in order to create an album that could compare to other classic metal records they admired. Amplifying their fondness for groups like Judas Priest, Iron Maiden, Pantera, and Soundgarden, Believe was released in the fall of 2002 and was recognized as a heavier, more varied, and ultimately superior record to their debut, ultimately reaching the top of the Billboard 200. The tour document Music as a Weapon II appeared in 2004, and the ambitious studio full-length Ten Thousand Fists in September 2005. In March 2009, Disturbed released a video for the song "The Night".[1]

Retrieved from "https://rock.fandom.com/wiki/Disturbed?oldid=16616"
Community content is available under CC-BY-SA unless otherwise noted.