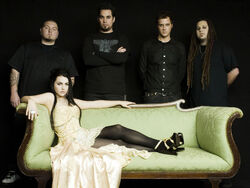 Evanescence is a relatively new band, leaning on the goth metal genre. The band is known for mixing genres there for putting them in a box can be hard. The band members are Amy Lee (lead singer and songwriter), and Ben Moody (songwriter and lead guitarist). Rocky Grey, John LeCompt, and Will Boyd joined the band, as they were friends of Amy and Ben.

Fallen, their first album, skyrocketed them towards success. The songs on that album are played usually on KRZ and other popular radio channels. The songs on Fallen are Bring Me to Life, Going Under, My Immortal, Everybody's Fool, and others.

The Open Door, the long awaited second album, came out on September 25, 2006. The songs on The Open Door are Call Me When You're Sober, Sweet Sacrifice, Lithium, Weight of the World, Snow White Queen, Cloud Nine, Your Star, All That I'm Living For, Good Enough, The Only One, Lose Control, Lacrymosa, and Like You.