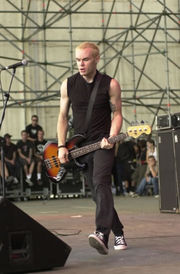 Hunter Burgan (born 14 May 1976) is the third and current bassist of AFI. He played in a band called The Force at the time that he joined AFI. He was meant to be a temporary replacement for the existing bassist, for a few tours and a record, Shut Your Mouth and Open Your Eyes, but eventually became AFI's full-time bassist in November 1997. The Force broke up in September 1998.

Burgan loves Prince's music and even has his own side-project called Hunter Revenge dedicated to singing early-Prince-style R&B. He is the person playing piano in AFI's "The Chicken Song". Burgan can play drums, bass, guitar, saxophone and piano. He was the drummer and one of the founding members of The Frisk, who played their final show in December, 2005. He has also played drums for The Eyeliners and the Halo Friendlies on tour.

Burgan is a vegan, as is AFI's singer, Davey Havok. Burgan is often considered the most friendly, approachable member of AFI, and sometimes interacts candidly with fans on his personal website.

He also has a side project entitled "Hunter Revenge", which released an eight song self titled album in 2001 via Checkmate Records. He says he has "a ton of new material recorded and ready to go, but everything is on pause until AFI takes a break. I wouldn't want anything I do outside to interfere or take precedence."