Soft rock or light rock[1] is really a subgenre of pop rock which uses the techniques of rock music (often combined with elements from folk music, brill building, baroque pop and folk rock) to compose a softer, more toned-down sound.

Hard rock had been established as a mainstream genre by 1965. From the end of the 1960s, it became common to divide mainstream rock music into soft rock as the true folk rock sound.[2] with both emerging as major radio formats in the US.[3] Soft rock was often derived from folk rock, using acoustic instruments and putting more emphasis on melody and harmonies. Major artists included Carole King, Cat Stevens, The Hollies, James Taylor[4] and Bread.[5][6] Soft rock songs generally tend to focus on themes like love, everyday life and relationships. The genre tends to make use of acoustic guitars, pianos, synthesizers and sometimes saxophones. The electric guitars in soft rock are normally faint and high-pitched.

The Carpenters' hit version of "(They Long to Be) Close to You" was released in the summer of 1970, followed by Bread's "Make It with You", both early examples of a softer sound that was coming to dominate the charts.[7] This eventually reached its commercial peak in the mid-to-late 1970s with acts such as Billy Joel, Elton John, Chicago, Toto, England Dan & John Ford Coley, Air Supply, Seals and Crofts, America and the reformed Fleetwood Mac, whose Rumours (1977) was the best-selling album of the decade.[8] By 1977, some radio stations, like New York's WTFM and WYNY, had switched to an all-soft rock format.[9] By the 1980s, tastes had changed and radio formats reflected this change, including musical artists such asJourney.[10][11]

The radio format evolved into what came to be known as "adult contemporary" or "adult album alternative", a format that has less overt rock bias than its forebear radio categorization. 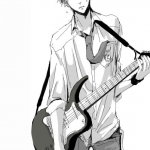